The additives business was a strong driver for the recent, very strong performance of LANXESS in the U.S. In 2017, the company’s total U.S. sales have increased by some 40% from USD 1.4 billion to USD 1.9 billion, the highest number in the company’s history.

With the acquisition of Chemtura, LANXESS has significantly strengthened its competitive position in the area of lubricant additives and synthetic lubricants for industrial applications.

“We are now one of the leading suppliers of industrial lubricants and possess an integrated value chain,” said Anno Borkowsky, head of LANXESS’ Additives business unit. LANXESS expects medium-term growth of 3% to 4% annually for the industrial lubricant additives market, driven primarily by steadily increasing demands placed on lubricants as regards performance capability and environmental compatibility.

“Flame retardance requirements are continuously rising due particularly to the trend toward energy-efficient construction. The acquisition made us one of the world’s leading suppliers of flame retardant additives. We can offer our customers an array of complementary brominated and phosphorus-based products from a single source,” said Borkowsky. LANXESS also expects medium-term annual growth rates of 3% to 4% for its flame retardant additives business.

In February 2018, LANXESS took a further step to grow its additives business in North America by purchasing the phosphorus chemicals business from Belgian chemicals group Solvay, including its U.S. production site in Charleston, South Carolina.

“With this acquisition, we gained a North American platform for phosphorus-based specialty chemicals – a key component of our additive business – and are able to further drive our growth in this key region,” said Borkowsky.

With the acquisitions, LANXESS has significantly expanded its platform in North America. The number of production sites, as well as the number of employees, have roughly doubled. LANXESS now has 24 production sites and employs some 2,800 staff in the region.

Most of the U.S. sites are occupied by the additives business including the Research Campus in Naugatuck as the main R&D center. More than 60 scientists and engineers are working there on innovations, primarily for the lubricants and flame retardants businesses, but also for the company’s urethanes business.

“Out of Naugatuck, we are driving global innovations like reactive and polymeric flame retardants or new friction modifier additives,” said Borkowsky. Demand for reactive and polymeric flame retardants is rising as they offer better fire safety and sustainability performance than standard flame retardants, he said. In the lubricants market, new friction modifiers cater to the automotive industry’s increased attention to greater fuel economy and lower emissions. Latest product developments account for up to 5% improvement in fuel economy for passenger cars. 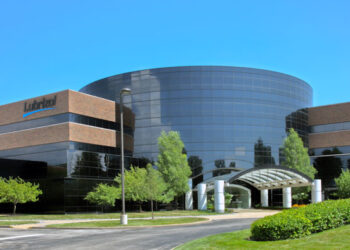