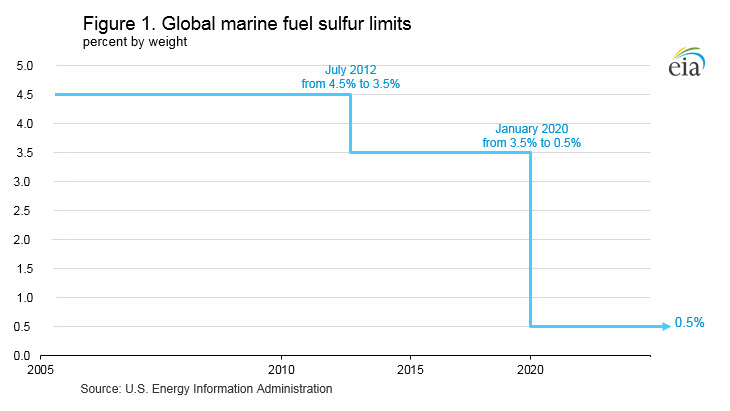 With a planned effective date of January 1, 2020, the International Maritime Organization’s  (IMO) new regulations (IMO 2020) limit the sulfur content in marine fuels that ocean-going vessels use to 0.5% by weight, a reduction from the previous limit of 3.5% established in 2012. The IMO adopted the plan for this policy change in 2008, and in 2016 reaffirmed an implementation date of 2020.

The change in sulfur limits has wide-ranging repercussions for the global refining and shipping industries as well as for petroleum supply, demand, trade flows, and prices. The shipping and refining industries have already begun making preparations and investments to varying degrees to accommodate IMO 2020 regulations.

As the implementation date for the 0.5% sulfur cap approaches, the U.S. Energy Information Administration (EIA) expects that shifts in petroleum product pricing may begin as early as mid-to-late 2019. EIA anticipates that the effects on petroleum prices will be most acute in 2020, and the effects on prices will be moderate after that. However, the regulations will affect petroleum supply, demand, and trade flows on a more long-term basis.

Both STEO and AEO2019 are based on current laws and regulations. AEO2019 centers around a reference case based on relationships and general equilibrium models that satisfy projected energy demand under a set of constraints.

STEO provides forecasted data that are updated every month. EIA uses a combination of econometric models based on historical data to forecast where EIA anticipates energy markets will move in the next two years. The STEO relies on historical data, short-term trends, and analyst judgment in creating this forecast.

Although the STEO forecasts fewer variables than the Annual Energy Outlook, STEO’s publication frequency allows EIA to incorporate developments related to the IMO rule more regularly than AEO2019, which projects variables at an annual frequency through the year 2050. In addition, because the STEO is published monthly, EIA adjust its forecasts continuously to incorporate new information.

Because the current STEO forecasts end in December 2020, the data in AEO2019 provide EIA’s projections with insight into how IMO 2020 will affect petroleum markets beyond 2020. In addition, AEO2019 has more detailed data on refinery operations, marine fuel use, and fuel costs than the STEO. Projections in the Annual Energy Outlook are generated from EIA’s highly detailed, structured equilibrium models in its National Energy Modeling System.

The first section of this report explains the findings related to IMO 2020 from the STEO and AEO2019 analysis. The second section discusses the uncertainties that might affect the way that actual outcomes deviate from EIA’s forecasts and projections.

Globally, marine vessels are a critical part of the global economy, moving more than 80% of global trade by volume and more than 70% by value. They account for about 4% of global oil demand (about 4.3 million barrels per day (b/d) according to the International Energy Agency). In the United States, consumption of bunker fuel (the fuel mix consumed by large ocean-going vessels) is a relatively small share of total energy demand. In 2018, U.S. bunker fuel consumption represented about 3% of total transportation energy use and just 2% of total U.S. petroleum and liquid fuel use. Of the 4.3 million b/d of global marine sector demand, about 10% of those sales originated at U.S. ports. Those sales of marine fuels at U.S. ports represent the AEO2019 international marine demand projections.

Residual oil—the long-chain hydrocarbons remaining after lighter and shorter hydrocarbons such as gasoline and diesel have been separated from crude oil—currently accounts for the largest component of bunker fuel. Although distillate fuels, the other large component in bunker fuel, have alternative uses and markets outside of marine fuels, residual oils have few other alternative markets. About 80% of total U.S. residual fuel demand is for marine bunkering. Therefore, the steps vessel operators take to comply with the new IMO 2020 sulfur limits have major implications for the use of residual fuel oils in marine fuels, for the price of residual fuel oil and its competitors, and for the refineries that produce residual fuel oil.

Operators of marine vessels have several options for complying with IMO 2020 sulfur limits. They can switch their ships to a lower-sulfur fuel that complies with the new IMO rules, which would likely increase demand for distillate and low-sulfur residual oils. Another option is to use scrubbers to remove pollutants from ships’ exhaust, allowing ships to continue to use higher-sulfur fuels. Vessel operators can also switch their ships to non-petroleum-based fuels, such as liquefied natural gas (LNG). In the AEO2019 Reference case projections, the fuel mix of ocean-going marine vessel bunkering in the United States changes significantly because of the new global sulfur fuel limits.

Similarly, EIA projects that the need to use distillate in lower-sulfur bunker fuels will increase distillate’s share of U.S. bunker demand from 36% in 2019 to 57% in 2020, although this share declines to 29% by 2025.

Outside of residual fuel oils and distillate, STEO forecasts that the use of LNG in marine bunkering will be limited through 2020. Similarly, the AEO2019 Reference case projects limited use of LNG in the next five years, reflecting the high initial infrastructure development cost and the limited current infrastructure to accommodate LNG bunkering at U.S. ports. In the medium and long term, this infrastructure barrier decreases, and LNG’s share of U.S. bunkering grows to 7% in 2030 and to 10% by 2050. 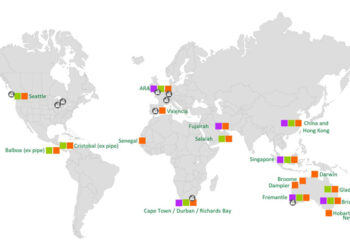 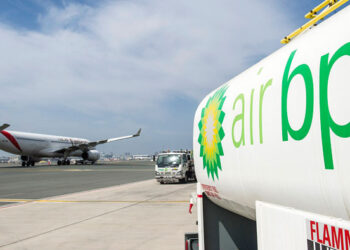