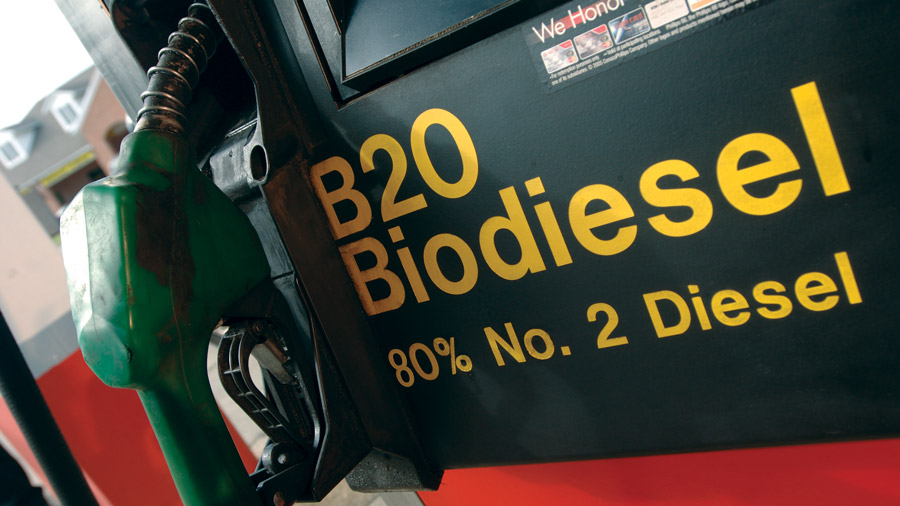 Photo courtesy of the National Biodiesel Board

Biodiesel is designed for use in standard diesel engines. The fuel is created using a chemical process called transesterification whereby vegetable or animal fats are reacted with short-chain alcohols to separate the glycerin from the fat or oil and produce methyl ester (the chemical name for biodiesel). Triglyceride is simply the name for an oil or fat. Each triglyceride molecule consists of three fatty acid chains linked, through a separate chemical bond, to one glycerol molecule. Triglycerides are a by-product of producing protein, and the starting component for biodiesel.

The use of biodiesel is garnering increasing attention throughout the globe due to the fact it burns cleaner in nature. However, recent testing by diesel engine manufacturers has uncovered the truth that some audacious fuel manufacturers are putting raw triglycerides in their diesel fuels without first converting them into biodiesel. The curious deception of using raw feedstock instead of a processed product like biodiesel is, presumably, to avoid the costs associated with biodiesel production.

National Biodiesel Board Senior Technical Advisor, Steve Howell, says fuel manufacturers should not be adding raw triglycerides to diesel fuel. Howell is president and founder of MARC-IV Consulting, Inc. The practice is causing a variety of field issues with vehicles, in particular, coking injectors. One of the major downsides of using unrefined triglycerides is poor cold flow property due to high density and viscosity. Transesterification is a common method of reducing oil viscosity.

This is a worldwide issue, and it is not solely confined to the automotive industry. Recent issues with marine fuels are believed to be attributable to triglycerides in marine fuels, prompting changes to ISO standards, says Howell.

The voluntary standards organisation has also established biodiesel specifications that prescribe the method for modifying triglycerides for use in diesel engines. Conniving manufacturers are clearly trying to flout the rules.

So how was this not picked up earlier? There is no test in the diesel fuels specifications that will measure the negative impacts of triglycerides on a fuel. Diesel fuel has no stability standard, says Howell. Even in the presence of raw triglycerides, if you analyse the diesel fluid specifications it will meet all the specifications on table 1, he says. However, it may not provide a fuel that works effectively in a diesel engine.

In some instances, manufacturers have claimed triglyceride as an additive to circumvent ASTM specifications. Biodiesel is a blend stock, not an additive, and even below 1% blends it warrants its own standard. If manufacturers wish to add triglycerides to diesel fuel, they must develop a new standard that can be used for heating oil, diesel fuel and on-ground gas turbine specifications, says Howell.  Notwithstanding, engine manufacturers are unlikely to support such a move.

ASTM is already taking action to close the apparent loopholes on this issue. At the June 2019 ASTM D02 committee meeting in Denver, Colorado, U.S.A., Subcommittee E balloted the alignment of ASTM D975 diesel fuel to clarify that triglycerides are not considered as an additive. These changes have already been made in the heating oil specification, says Howell. A similar update will be required for the D2880 gas turbine specification to ensure the three major specifications are aligned.

As far as standards go, this is a fairly simple one to update, says Howell. There is already a general consensus that this is a good thing to do, so it is a matter of ensuring that everyone agrees on the specific wording. Wordsmithing changes will be balloted during the subcommittee meeting next semester, he says. All going well, a final vote will occur at the December meeting in New Orleans. If it passes, the standard will undergo ASTM editorial review and process checking before likely being published in the first quarter of 2020.