Mention the word ‘blockchain’ and you’re likely to provoke a mixed response. For many the term is closely intertwined with Bitcoin, the eminent cryptocurrency. Bitcoin is perhaps the most well-known implementation of blockchain technology. It has enjoyed a disproportionate narrative in the digital world in recent times. Sceptics label it the wild west and a bubble about to burst. Advocates hail the digital currency as the future, welcoming the deregulated and distributed nature of the exchange.

Regardless of your standpoint, it is important not to confuse cryptocurrency with the ‘blockchain’ that underpins it. Blockchain technology offers a decentralised, encrypted and secure data storage solution set to transform many major industries, not just within the financial sector. Blockchain or the technically similar ‘distributed ledger technology’ (DLT) have limitless applications in large, complex, data-rich environments with a web of suppliers, shippers or contractors.

But before touching on the implications for the fuels and lubricants industries, it is important to define blockchain technology. In layman’s terms, the blockchain is a system of computers connected via the internet, that allow the transfer of digital assets in a real-time, immutable manner. Data are replicated across a peer to peer network, eliminating the need for a central intermediary (such as a bank), with transactions secured by digital signatures and cryptography. Transactions are recorded in blocks in the distributed ledger and are permanent. They are also transparent to anyone with access to the blockchain.

While still in the nascent stage, the distributed, secure and transparent attributes offer boundless opportunity throughout the entire value chain which has allowed the technology to gather momentum.

The automotive industry is one sector beginning to weave DLT into the fabric of an already complex ecosystem. A December 2018 report by the IBM Institute for Business Value entitled ‘Daring to be First’ observed that 62% of auto industry executives expect Blockchain technology to become a “disruptive force” in the industry by 2021, with the potential to overcome common automotive industry issues relating to supply chain management, vehicle safety, data security, and to encourage innovation. The IBM report claims that within three years, more than half (54%) of ‘Auto Pioneers’ aim to implement their first commercial blockchain network.

On 2 May 2018, a Mobility Open Blockchain Initiative (MOBI) was launched at the Dubai Future Blockchain Summit. MOBI is a consortium co-founded by leading automakers including BMW, General Motors (GM), Ford Motor Company and Renault. MOBI comprises blockchain start-ups; technology organisations such as IBM, Accenture, and ConsenSys, as well as NGOs and academic institutions. The collaboration highlights the burgeoning interest in blockchain technology and hopes to explore the use of blockchain to improve safety, affordability, efficiency and industry transparency. Common standards for blockchain and distributed ledger technologies is a central focus of the group.

Outside of this collaboration, plenty of automakers have already laid a stake in the ground.

Ford is piloting technology to engender greater social and environmental sustainability in their mining supply chain. In January 2019, the automaker announced a partnership with Huayou Cobalt, IBM, LG Chem and RCS Global that will trace and validate the ethical supply of cobalt. “Our intent is to use state-of-the-art technology to ensure materials produced for our vehicles will help meet our commitment to protecting human rights and the environment,” says Lisa Drake, Ford’s vice president, global purchasing and powertrain operations.

One of the critical minerals in the production of batteries for electric vehicles is cobalt. Demand is predicted to multiply eightfold by 2026, according to a recent report by Morgan Stanley Research. The Democratic Republic of Congo supplies 60% of the world’s supply of cobalt. With political instability and child labour rampant, Ford is understandably nervous about prospective supply partners. The project will provide assurance that materials in the supply chain are produced, traded and processed responsibly.

Volkswagen is another large automaker beginning to embed blockchain technology. Somewhat ironically, the company is developing a tracking system to prevent the fraudulent practice of manipulating odometers in vehicles to produce deceptive mileage values. A partnership with blockchain start-up carVertical looks to tackle the estimated USD10.6 billion lost by unwitting buyers every year in Europe.

Toyota Research Institute announced in May 2017 that it was exploring blockchain technology to create a new mobility ecosystem that could “accelerate development of autonomous driving technology.” Several automakers share their objective of securely distributing driving and autonomous vehicle testing data. A patent, published by the U.S. Patent and Trademark Office on 29 November 2018, outlines GM’s plans to maintain the integrity required for autonomous vehicle operation by managing and storing data on a distributed ledger.

A myriad of other automotive blockchain projects are underway including a joint research effort by Honda and GM on smart grid interoperability to assess whether electric vehicles could stabilize the supply of energy in smart grids. Mercedes-Benz has developed a blockchain prototype to allow for consistent storage of documentation and contracts in complex supply chains, and Renault is reportedly developing an undisputable car maintenance history using blockchain.

Automakers are often at the forefront when it comes to the use of emerging technologies. But what does all this mean for the fuels and lubricants industries?

Blockchain has the potential to fundamentally change the way in which certain financial and nonfinancial transactions are conducted. If OEMs are investing in enterprise-wide blockchain architecture, suppliers will likely need to follow suit. Though, such investments should benefit all involved.

An all-in-one system of accountability could deliver much-needed trust in transactions throughout the supply chain. The ability to track physical goods in real-time on a blockchain-based digital ledger — that ensures records can’t be duplicated, faked or manipulated — has clear benefits for an industry battling the tricky issue of oil counterfeiting, or in the enforcement of environmental regulations.

One of the most popular applications of blockchain technology is the use of smart contracts; which are basically computer codes recorded in blocks and executed once certain preconditions are triggered. The ability to program business logic and operations with non-manipulable and transparent processes between interacting parties has the potential to streamline tasks that typically require manual data insertion, revisions, or transactions. This could reduce the reliance on intermediaries such as administrations, banks and notaries.

Like OEMs, the oil and gas industry is beginning to explore opportunities to reimagine their own businesses using blockchain technology. The Offshore Operators Committee (OOC) Oil & Gas Blockchain was launched on 26 February 2019 with seven founding member companies — Chevron, ConocoPhillips, Equinor, ExxonMobil, Hess, Pioneer Natural Resources and Repsol. The consortium intends to conduct proof of concepts with this emerging technology in 2019. The establishment of OOC Oil & Gas Blockchain Consortium is “a significant step toward establishing key blockchain standards, frameworks and capabilities for the oil and gas industry,” says Rebecca Hofmann, chairman of the board of directors. 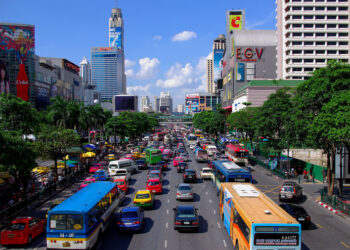