The situation couldn’t be more different now. Lingering Covid-19 pandemic impacts and the war in Ukraine have created extreme volatility and global oil supply is struggling to maintain pace with demand. As a result, oil prices are up and oil producers are enjoying record profits.

Market uncertainty as the Ukraine-Russia war drags on is shining a spotlight on the oil refining industry and there are questions about what the industry will look like over the coming years. Will the current instability be a setback for the clean energy transition, or will it encourage faster change? One thing is sure, a low-carbon economy will create significant challenges for the oil refining sector.

An analysis by global management consulting firm, McKinsey & Company, published in October 2022, explores what the oil refining industry could look like over the next couple of decades. The report, Refining in the energy transition through 2040, indicates that climate commitments from individual countries and industries, technological advancements and changing consumer preferences will be key in shaping the oil refining outlook to 2040.

There are currently 1.3 billion passenger cars on the road which accounted for almost 25% of global oil demand in 2021. Road transport will contribute 90% of the decline in global liquids demand between 2019 and 2040, says McKinsey. The pace of adoption of electric vehicles (EV) will have the greatest impact on liquid fuel demand.

McKinsey outlined several possible energy transition scenarios and their diverse impacts on the oil refining industry. A Current Trajectory (CT) scenario, based on the existing path of technology improvements, climate policies and targets announced at the end of 2021, predicts that EV sales will reach around 50% of new vehicle sales globally as early as 2030. This scenario results in a peak in global liquid fuels demand in 2027.

More stringent government transportation targets, alongside greater contributions from biofuels, hydrogen-enabled synfuels, and carbon capture, utilisation, and storage (CCUS), are outlined in the Further Acceleration (FA) scenario. FA anticipates peak liquid fuels demand arriving in 2025, although this remains contingent on further reductions in battery costs and wide scale internal combustion engine (ICE) bans— to elevate EV share to 70% of new vehicle sales by 2030. Under this scenario, rapid adoption of EVs also eventuates in developing countries such as India, Africa, and Southeast Asia. The scenario also assumes net zero pledges are achieved on time, including in the U.S. and China.

Under a Fading Momentum (FM) scenario peak liquid fuels demand is delayed until the early 2030s. Lower government ambition and sustained supply chain disruptions are evident in FM and we continue to rely on fossil energy into the next decade. EV penetration does not reach 50% of new car sales until beyond 2035 and oil demand remains at 15 mb/d higher in road transport than in the FA scenario, by 2040.

McKinsey’s assessment provides a similar perspective to the International Energy Agency’s (IEA) World Energy Outlook 2022.  Under the trajectory implied by today’s policy settings (Stated Policies Scenario), oil demand reaches a high point in the mid‐2030s at 103 mb/d, followed by a gentle decline to 2050. The IEA’s Advanced Pledges Scenario, associated with stronger policy action, indicates global oil demand will peak in the mid‐2020s before dropping to 93 mb/d in 2030a similar level of demand as in 2019. The World Energy Outlook outlined a potential drop in demand in advanced economies of 7.5 mb/d between 2021 and 2030, although this drop is mitigated somewhat by a 4 mb/d rise in developing regions.

The IEA report, released in November 2022, also included a Net Zero Emissions by 2050 (NZE) scenario that charts a path to a 1.5 °C rise in global average temperatures. In this pathway, oil demand never returns to 2019 pre-pandemic levels and declines sharply, falling by nearly 20 mb/d between 2021 and 2030. From 2030 to 2050 the declines accelerate, diminishing at just under 6% each year. By 2050, oil use for passenger cars declines by 98%. However, the petrochemicals sector remains more robust for oil producers, and only decreases by around 10%.

McKinsey’s analysis describes a broad range of potential outcomes regarding the size of the global oil refining industry. At one extreme, refining could lose as much as 75% of its value on an EBITDA-equivalent basis by 2040. Under the CT and FA scenarios, the global refining value pool falls by between 60 and 75% of average historical levels as government policies and technology propel a strong uptake of renewable electricity. However, the report notes that oil refineries will continue to play a vital role in the new low-carbon energy system as a supplier of biofuels and green hydrogen.

In FM, the oil refining industry remains broadly similar in size by 2040 as value-pool declines in Organisation for Economic Co-operation and Development (OECD) regions are offset by growth in the rest of the world, led by Asia and the Middle East. The value pool stabilises around USD150 billion between 2030 and 2040, compared to an average of USD156 billion between 2015 and 2019, according to FM modelling.

Oil refining capacity in North America and Europe is most at risk, courtesy of an earlier peak in global liquid fuels demand and falling margins.  In North America, between 5% and 41% of oil refining capacity could face negative net-cash margins by 2040, depending on the scenario. The capacity at risk of closure or conversion is even higher in Europe—ranging from 20% in FM to 60% in AT. McKinsey attributed declines in regional demand, high energy costs and rising carbon dioxide prices in the European Union Emissions Trading System as key stimuli in oil refining capacity decline.

In the World Energy Outlook’s APS over half of existing oil refining capacity could face closure or lower utilisation by 2050 and the report suggests that very few capacity additions will occur after under-construction projects come online. The IEA highlighted the importance of investing in emissions reduction from oil refining operations including low-emissions hydrogen, CCUS and efficiency improvements —for traditional oil companies to survive.

Not only do oil refiners have to cope with a change in overall demand levels, but also in the composition of demand. Integration with petrochemical operations, the most durable element of demand, is a major strategic priority, says the IEA. In their analysis, McKinsey indicates that refineries with a simple configuration, coastal location with exposure to export competition, non-integration with petrochemicals or private ownership are most likely to close or undergo a terminal or biofuels conversion. 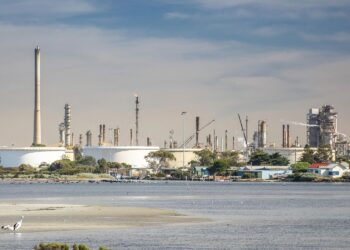