While the lubricant business is undoubtedly global, research and development (R&D) of new lubricants is increasingly being segmented into different technological regions.

The regions are centered in Japan, the European Union and the United States, said Lutz Lindemann, a member of the executive board of Germany’s Fuchs Petrolub SE. More and more, the regulations in each region are influencing product development, he said. Lindemann touched on some of the restrictions to product development at the UNITI Mineral Oil Technology Conference in Stuttgart, Germany in April.

One main challenge in the global lubricants market is health and safety regulations. In 1992, when the Globally Harmonised System (GHS) was conceived by the United Nations, the environmental health and safety system was not coherent across the globe, he said. Different areas had their own ways of labelling toxic substances, such as: “toxic hazard,” “harmful chemicals” and “poison.” The new system, GHS, involves one common set of pictograms, one of which is the skull and crossbones symbol.

As of 2014, GHS had been implemented in the U.S., parts of South America and Asia, Australia, New Zealand and Russia. Other regions are in progress. The implementation takes a building block approach, he said, in which each country can decide which sections, or blocks, it would like to implement. The countries themselves are in charge of the implementation. This approach “gives us an incoherent landscape of the environmental health and safety regulations,” he said.

International shipping can be complicated when the labeling varies from starting point to destination. As the GHS is being implemented in different levels and at different paces across the globe, it is not much more coherent than the way things were in the early 1990s, he added.

REACH is another way that the development of new products is being restricted, he said. REACH stands for Registration, Evaluation, Authorisation and Restriction of Chemicals, and was set in place in 2007 by the European Union, the idea being to enhance innovation and competitiveness in the European chemicals industry. REACH has a “no data, no market” philosophy, meaning it is a company’s responsibility to show the European Chemicals Agency (ECHA) that any new substance can be safely used.

Lindemann described all this as a paradigm shift regarding toxic chemicals. Any new molecule, if there is limited data on it, is considered highly toxic until a full toxicological screening is conducted. Lindemann said this screening takes extensive resources, and could cost USD one million or more.

“This is an exercise which limits the available raw material basket to existing molecules. To be innovative takes more considerations to be sure they do not run into toxicological problems, due to the regulations,” he said.

To make things more difficult, REACH inhibits interactions between countries, he said. China, for instance, will only accept data from Chinese labs, and the same is true for some other countries as well. Sustainability is another driver for lubricants, but its definitions vary. “Sustainable” may mean biologically inactive, biodegradable or non-toxic, or it can be defined in terms of carbon dioxide footprint. Additionally, the idea of sustainability tends to compete with profitability, he said. He pointed to an “unsolved conflict of interest between economical and ecological interests.”

The industry is very passive in establishing and clarifying standards for sustainability, partly because it does not bring about great economic benefit, he said. Any potential sustainability regulations may come from the European Union, he added. “There is a clear need for the industry to organise ourselves in a way that we define the standards very clearly, very strict and to influence the authorities in a way that we will not be hunted by the EU or other regulators.”

Because there is little common understanding as to how to define the ecological safety of a lubricant or ingredient, little progress has been made so far, he said. Across the world, most countries follow technological requirements from the U.S., Europe or Japan, if they have standards at all. The only area where these requirements overlap, Lindemann showed, is China. There, the specifications of those three areas are competing. China is, however, developing its own specifications, and according to Lindemann, will soon become its own technological region. This will make the global landscape increasingly fragmented.

In this new landscape, Lindemann said, R&D will need to be decentralised to cope with the different technology regions. “The idea of the global market and global product deteriorates a little bit in view of the current regulatory issues and restrictions we have.”

Lindemann arrived at two main conclusions: first, the regulations have to be considered from the beginning. The first step is knowing where the regulations are and complying with them, he said. Otherwise, an ingredient or the data on it may not be accepted. Finally, transitioning to a de-centralised way of developing products, focusing more on each target region, is more in line with the way the global marketplace is shaping up.

Within Fuchs, this approach has really changed the way of developing a product. “Instead of one application, one product, [you’re more likely to have] one application, three products, for the different regulatory regions.” Unfortunately, the end result of specialised product development for each region is an increase in the cost of developing new materials, he concluded. 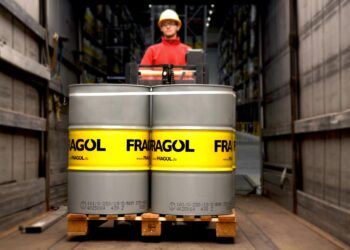