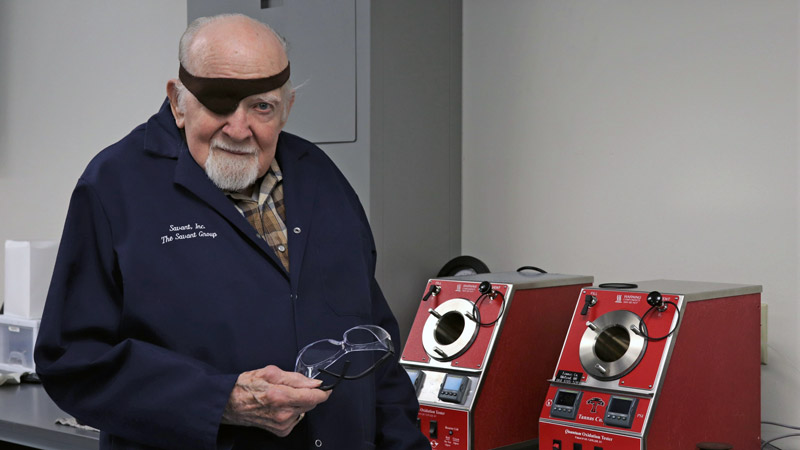 Each year the Society of Tribologists and Lubrication Engineers (STLE) honour outstanding achievements in its field. The highest technical honour is the STLE International Award (formerly the ASLE National Award) which bestows lifetime honorary membership on the recipient in recognition of the contribution he or she has made to the advancement of tribology, lubrication engineering and allied fields.

The 2018 recipient of the STLE International Award, presented during the STLE Annual Meeting in May 2018 in Minneapolis, Minn., U.S.A., is Dr. Theodore (Ted) W. Selby. For those involved in the fuels and lubricants industry, the name Selby is no doubt familiar. The 90-year-old Ted Selby is almost a household name, with unrivalled experience and countless achievements scattered throughout a glittering 67-year career.

Selby is the founder of the Savant Group which is comprised of four individual companies that provide products and services to the automotive, lubricant, and associated industries. These products and services include laboratory testing, innovative laboratory instrumentation, and extensive data from the collection and analysis of automotive engine oils. Savant Group has created numerous instruments that are used by participants in ASTM, CEC, ACEA and ILSAC. During his career Selby has been granted nearly 50 U.S. patents for lubricant test methods and high precision test instruments.

Despite a high likelihood that he is the oldest person in the industry still working and establishing a legacy that will likely live on for decades to come, Selby sees himself as one of many contributing to the seldom appreciated bedrock of this present civilisation — lubrication. The devout Catholic claims he is fortunate for the opportunities he has had and believes that “There are many others that have interesting ideas and abilities to express — they just haven’t been heard or found the opportunity.”

In the early stages of his career Selby became very aware of the range and importance of lubrication and the need to do as much as much as possible to make sure that it met the growing needs of civilisation. Leveraging his training and background as a physical chemist, Selby began to look at lubrication from the standpoint of problems and the generation of solutions that would not entail great expense, in other words — instruments and laboratory testing.

From that viewpoint, the Savant Group, which he started in 1969 as Savant, has based its business success on always being at the cutting edge and developing a reputation as problem solvers. The Midland, Mich., U.S.A.-based company’s ability to meet industry needs has generated impressive growth and influence in lubricants that has spread to all corners of the globe. Selby himself has brought a mix of physical chemistry, technical expertise and creative thinking to solving even the most complex of lubrication problems.

The University of Detroit graduate’s success is perhaps even more remarkable given it was a chance occurrence that impelled his employment in the area of lubricants. Selby was working in the Analytical Department at General Motors when he stumbled across a strange “viscosity” experiment being run by the Lubricants Department. Ever the inquisitive and helpful mind, Selby offered guidance on a simpler approach. A few days later a job offer from the Lubricants Department transpired — for him to engage in low-temperature engine oil measurements. Despite pursuing a Masters Degree in Physical Chemistry with a theoretical viscometry project at the time, Selby remembers it was a difficult decision. Being a part of departmental “poaching” was strongly frowned upon in the 50s, he recalls but he made the choice and entered into what became his technical calling.

Following a number of years at General Motors, Selby moved to Dow Chemical on the recommendation of his previous college professor. His background in lubricants and automotive industry contacts were appealing to Dow Chemical, who was in the process of advancing its automotive knowledge and capability.

So how does a technical man become such an accomplished businessman? Selby attributes his “very knowledgeable and experienced” father for much of his understanding. As a child, the transient Selby family frequently moved locations with Selby Senior’s job assignments — Nebraska, Iowa, New York, Chicago, and Detroit. Selby Senior had “a very fine mind” and picked up and expressed many skills along the way (“including fishing and cooking the best fish in the world”) – some of which skills he passed on to his oldest son, also named Theodore. “My Dad is the one who taught me to take the time to understand people in many ways and circumstances,” says Selby. “He taught me a number of things about life from his experiences and unusually sharp observations.”

Selby left Dow Chemical in 1969 to start Savant. Despite the blessing of his former employer, and a Dow contract as Savant’s first customer, the move was definitely not without risk. “I had nine kids at home at that time, no money in the bank, no provisions for retirement after I left the great job I had had at Dow.” Selby attributes the support and the heartening encouragement of his wife, Jean (who recently passed away), as central to his decision to begin Savant.

Savant was started as a materials-consulting firm with an emphasis on lubrication. As the Savant Group it now comprises three core companies, Savant Laboratories, Tannas, and the Institute of Materials. A fourth company, King Refrigeration, was a Tannas supplier and was acquired in 1994. Savant Labs has grown from a “little broom closet” laboratory to a world-class independent laboratory and research center in Midland, offering both standardised and custom-designed lubrication specification testing. Tannas Co. was established in 1981 as a result of the development of the world’s first commercial very high shear-rate viscometer with the encouragement of the additive arm of a large petroleum company. Today, Tannas designs, manufactures, markets, and services laboratory instruments that measure critical properties of automotive and industrial lubricants and related fluids. The Institute of Materials (IOM) since 1984 has published the world’s  independent compilation of important bench test data of marketed engine oils collected yearly from around the world. King Refrigeration, in conjunction with Tannas, concentrates on low-temperature laboratory instruments for testing of engine oils, lubricants, and related fluids.

Selby considers that the most important purpose of any business is to help its people develop their sense of self-value coupled with a keen eagerness and ability to serve others. He embedded this concept in the motto of the Savant Group — to be a “Wise Servant.” That is, beyond just working effectively on a given assignment, this is an attitude of wanting to serve one another and Savant’s customers by carefully listening, understanding and thoughtful contributions. Selby believes that much job satisfaction, personal growth and good customer service can come from this behavior as well as much new understanding to the benefit of all. One of the consequences is good business.

With so much experience and understanding garnered from almost 70 years in the industry, what does Selby think about the future of automotive fuels and lubricants considering the growing shift from petroleum-based liquid fuels to electrically-powered vehicles?

Selby believes that the most important technical and social challenge will be the need to produce the electricity to power the vehicles of an expanding civilisation which is so dependent on such transportation. It is very likely that much of this power — at least in the more immediate future — will come from sources presently supplying automotive fuels and lubricants. All of this transition, Selby believes, will come about with an increasingly aware and cooperative change in this society constituting our civilisation. That is, there will need to be a profound change in our way of accommodating one another. “We are going to have to be very supportive of one another in the future.” It may be a difficult process, he says, but what is coming is a time of our individual and collective growth in intelligent empathy and helpful effort.

As for the 90-year-old’s imminent plans, Selby remains actively involved in the Savant Group of companies and the lubrication industry and says he is “not done yet.” “I can’t retire — it’s been — and still is — too much fun and satisfaction.”