HOUSTON, May 09, 2018 — TPC Group today announced the appointment of Courtney Ruth as Senior Vice President, Operations and Peggy Macatangay as Vice President, Technology and Engineering for the Company.

Mr. Ruth will oversee the operations, maintenance, environmental, health, safety and security, Operational Excellence, capital and reliability for the Company. He joined TPC Group in 2016 as Vice President, Reliability and Capital Project Management. Mr. Ruth has been instrumental in driving the execution of the Company’s capital and reliability programs and was the overall lead on the successful completion of the Company’s recent turnaround on its dehydro unit.

Prior to joining TPC Group, Mr. Ruth held roles of progressive responsibility at LyondellBasell, including Maintenance Superintendent, Reliability Superintendent, Production Manager, Senior Human Resources Manager and Site Manager. At the time of his departure, Mr. Ruth had leadership responsibilities for LyondellBasell’s Channelview, Texas facility, one of the largest chemical complexes in the Gulf Coast region, with more than 2,000 employees and contractors.

Dr. Macatangay will oversee research and development, process engineering, process automation and quality control functions for the Company. She joined TPC Group in 2009 as Director, Research and Development, where she had responsibility for research and development and quality control. In 2013, Dr. Macatangay assumed responsibility for process engineering, and then in 2015 assumed the additional responsibility of capital projects and process control. Under the leadership and direction of Dr. Macatangay, TPC Group designed, built and opened in 2011 a state-of-the-art technical center. She has been instrumental in driving expanded polyisobutylene (PIB) capabilities and capacity to meet business demand and drive improvements and new product development, which includes several patents to maintain the Company’s technology position and products to drive new business growth and opportunity.

Prior to joining TPC Group, Dr. Macatangay held roles of progressive responsibility at Celanese, including Analytical Leader, Quality Control Leader and Pilot Plant Manager. At the time of her departure, she was Research Group Leader.

“For the past two years, we have made significant improvements in our operations and overall reliability, and in doing so, we have seen significant improvements in profitability as evidenced by our results in 2017,” said Chairman and CEO, Ed Dineen. “There are major opportunities for growth presented by substantially increasing our crude C4 volumes as well as new products driving growth in our polyisobutylene business. These organizational changes will enhance our drive to a higher reliability culture, more closely align technology and engineering needs and capabilities with the business strategy, and enhance our success in achieving our long range plan.” 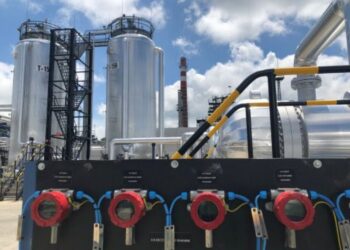