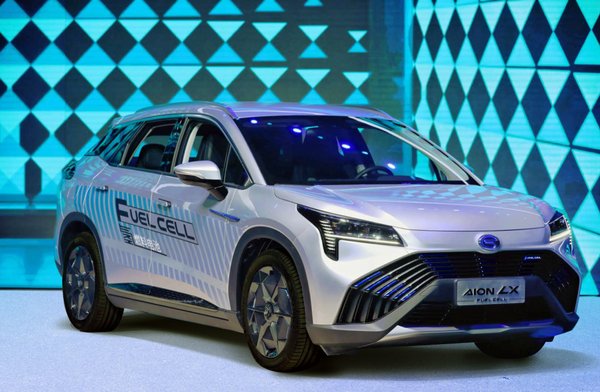 At the event, GAC unveiled its first hydrogen fuel-cell passenger car, the Aion LX Fuel Cell, attracting major industry observers and media due key benefits such as its fast charging times, long battery life and zero pollution. Industry experts have lauded the advent of hydrogen fuel-cell vehicles, as it is expected to become a popular environmentally friendly solution for vehicles with zero carbon emissions.

GAC Group has prioritized climate conversation as a strategy and are focusing on hydrogen-based clean energy, known as the “ultimate energy” of the 21st century. Hydrogen fuel-cell vehicles have become a forward-looking technology with promising development prospects.

GAC Group has achieved an industry-leading advantage in hydrogen fuel-cell technology through the launch of the Aion LX Fuel Cell. The hydrogen-based vehicle developed on the GEP 2.0 platform is equipped with a hydrogen fuel-cell system independently developed also by GAC Group.

GAC’s hydrogen fuel-cell vehicle has shown to solve several problems of current renewable energy vehicles. Firstly, it only takes 3-5 minutes to recharge each time, which is shorter than the charging time of most electric vehicles. Secondly, the NEDC operating range of this car exceeds 650KM, reaching international benchmarks. Thirdly, the car also solves the problem of ignition and operations in low-temperature weather: at minus 30Â°C, a one-button cold start can be enabled sans an external heat source without affecting the cruising range. Most importantly, its emissions are only pure water, and the filter element carried can filter 99% of the inhalable particulate matter, not only reducing pollution but also purifying the surrounding air.

The Aion LX Fuel Cell has also been comprehensively upgraded to exceed safety expectations. Built upon the five-star safety of the original model Aion LX, it has also passed difficult safety tests such as 32km/h side column collision and 80km/h rear collision.

Riding on the wave of technology and digitization, GAC Group has taken the lead in laying out a strategic industry-wide roadmap for technological innovation. GAC MOTOR has developed rapidly in overseas markets in recent years. Supported by GAC Group’s strong scientific and technological backing, the Group remains committed to bring a high-tech driving experience to people all over the world and continue to create value for a lifestyle of mobility for humankind.