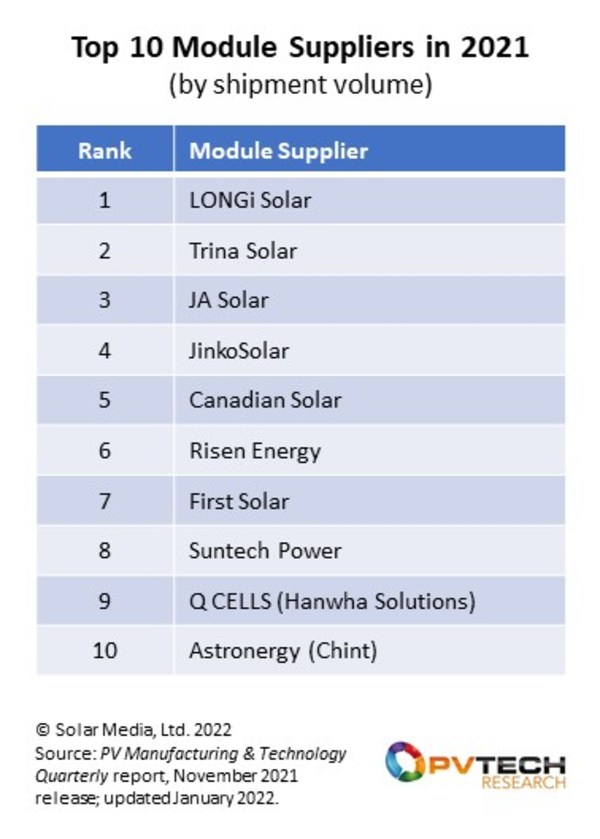 The latest ranking is based on PV InfoLink's supply and demand database. In terms of module size, PV InfoLink estimates that the shipments of large modules by the top 10 manufacturers (excluding First Solar) are about 60GW or more, accounting for about 40% among total shipments by the top 10 in 2021, in which shipments in the second half of the year were double those of the first half of the year. Large modules have become by far the most popular.

The global PV industry grew by leaps and bounds last year, PV-Tech said, with both overall capacity and shipments exceeding 190GW. The numbers were consistent with a forecast for 2021 that PV-Tech made at the end of 2020. The shipments section of the rankings forecast was based mainly on the continuous tracking for each module maker's annual production capacity and shipments. Ranking of module suppliers' shipments in 2021:

Ultra high-power modules have been deployed in solar projects worldwide, including in many GW- and 100 MW-grade projects. At the same time, there is growing demand in the global PV market for 210mm modules, and this is expected to drive further increases in the capacity and shipments of the high-power modules.

Large modules began to predominate in 2021, with 210mm modules firmly taking the lead. According to the latest report from the market intelligence provider TrendForce, the capacity of large-size modules is expected to reach 349.9GW this year, commanding a combined market share of 74.6%. The capacity of 210mm modules alone is expected to reach 206.8GW, accounting for 44.1%.