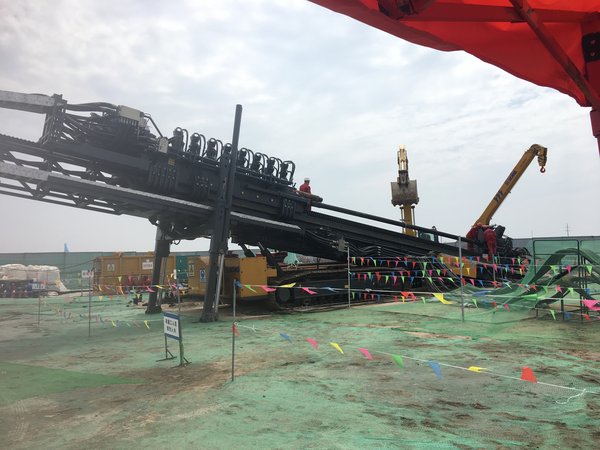 CAOFEIDIAN, China, June 1, 2020 /PRNewswire/ — XZ13600, the world’s largest horizontal directional drill from XCMG, has made its debut assisting in the non-excavation construction of the China-Russia east-route natural gas pipeline, a major project from the “Belt and Road” Initiative that began operations in December, 2019.

The China-Russia east-route natural gas pipeline is setting new milestones for energy cooperation between the two countries. The project is first to adopt the large 1,422mm caliber pipeline and will be the largest long-distance natural gas pipeline in the world when completed. It will supply natural gas to China’s northeast, Bohai Rim and Yangtze River Delta regions and is also the first pipeline in Chinese history to achieve full localization of key equipment and core control systems.

“The XZ13600 has been essential during the construction of the pipeline, as the largest tonnage horizontal drill in the world, with a super high push-pull force of 13600kN from multiple engines, it has ensured high efficiency of power output in throughout multiple stages of the project,” said Kong Qinghua, General Manager of XCMG Foundation Construction Machinery Business Division.

The XZ13600 assisted in the 750-meter crossing project of Shuanglong River in Caofeidian, Hebei Province, which is located on the coast with highly mineralized groundwater and uneven stratum. The farming zone and salt field each needed to be protected to avoid damaging the environment, while the large-diameter reaming, long-distance crossing and complicated coastal terrain all put strict demands on the equipment. The XZ13600 was able to complete the crossing in two weeks and moved on to the 1,650-meter natural gas pipeline construction project.

XCMG is a multinational heavy machinery manufacturing company with a history of 77 years. It currently ranks sixth in the world’s construction machinery industry. The company exports to more than 183 countries and regions around the world.