Parent SK Innovation, South Korea’s largest oil refiner, said it has hired Citigroup Global Markets Inc. to explore the possibility of selling its subsidiary SK Lubricants, which produces and exports high-quality base oils to more than 50 countries and finished lubricants to 25 countries. The company could be valued between KRW3 trillion (USD2.5 billion) and KRW4 trillion (USD3.3 billion), according to the Korea Economic Daily.

“We are currently reviewing various strategic options to secure financial health and finance our new businesses, but we have not yet decided whether to sell SK Lubricants or how much of a stake we will sell,” an official at SK Innovation told Reuters.

Two years ago, SK Innovation had planned an initial public offering (IPO) of SK Lubricants, which is believed to have, at that time, a nearly 40% market share of premium lubricating base oil sales globally. SK Lubricants has joint venture base oil manufacturing plants with Repsol in Cartagena, Spain, and Pertamina in Dumai, Indonesia. However, the IPO was cancelled at the last minute, after the market failed to meet the company’s share price expectations. SK Lubricants had offered a price band of KRW 101,000 (USD 94.43) to KRW 122,000 (USD 114.07) per share. At the time, the company said it planned to invest the amount raised in the IPO in future expansion projects.

This time around, SK Innovation is seeking new funding to expand its electric vehicle battery business. The stake sale could be up to 49%, or the entire unit.

Its negotiations with Seoul-based private equity firm MBK Partners also broke down in 2015 due to a difference in valuation. MBK reportedly had valued SK Lubricants at KRW3 trillion (USD2.5 billion), below SK’s estimate.

SK Innovation has been streamlining its traditional core oil refining and chemical operations to shift its focus on new businesses. In March, SK Networks announced the sale of 199 service stations to two affiliates of Koramco REITs Management & Trust for KRW1.27 trillion (USD1.07 billion), plus KRW66.8 billion (USD56 million) for the leasing rights of 103 service stations and other operational resources to be paid by Hyundai Oilbank. The transaction will give Hyundai Oilbank bragging rights to share the No. 2 spot with GS Caltex, in terms of the number of service stations in South Korea.

Recently Dr. Seongjun Lee, chief technology officer of SK Innovation, announced that the company is preparing for the next-generation battery era, together with Professor John B. Goodenough, a 2019 Nobel laureate in chemistry who is known as the father of the lithium-ion battery, and Dr. Hadi Khani at The University of Texas at Austin. They aim to develop a unique gel-polymer electrolyte for a lithium metal battery with the goal of providing higher energy density and better safety at a competitive cost.

“SK Innovation believes this will be a meaningful step on our journey to deliver an innovative lithium-metal battery that is safe and cost-competitive,” Lee announced. 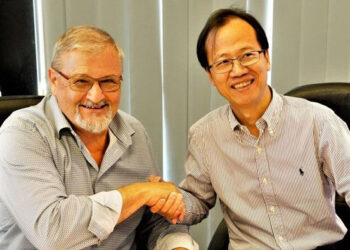