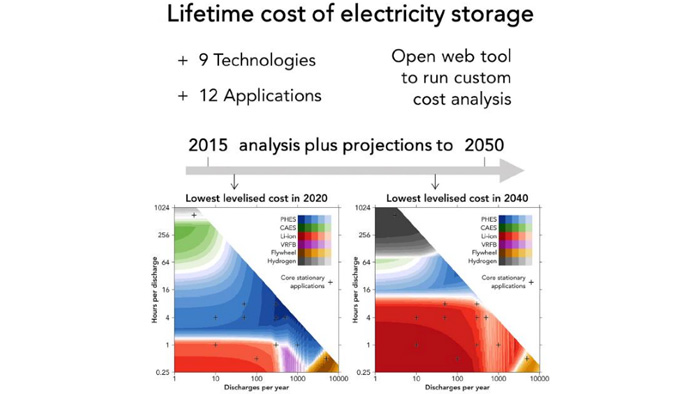 This visual abstract depicts an analysis of 9 energy storage technologies between 2015 and 2050. Credit: Schmidt et al./Joule

A new study by researchers at Imperial College London, reveals that batteries based on lithium-ion could be the cheapest way to store electricity, such as from solar or wind farms, by 2050. The study, which was published in Joule on 9 January, could help industry and policymakers decide where to invest research and capital to make the best use of energy storage technologies.

While previous studies of energy storage costs primarily focused on the investment costs only, the new study determines the ‘levelized cost of storage’ – the full costs of storing energy including investment, operation and charging cost, as well as technology lifetime, efficiency and performance degradation.

“Our model is the first to project full energy storage costs into the future, allowing predictions of which technology will be most competitive in a particular application at a particular time,” said Lead Researcher Oliver Schmidt from the Grantham Institute and the Centre for Environmental Policy at Imperial College.

The new research calculates the cost of storing energy with different technologies, including large-scale batteries and pumped-storage hydroelectricity, and predicts those costs into the future.

Based on this model, battery technologies based on lithium-ion are predicted to be the cheapest way of storing energy for most applications, such as making sure energy grids do not suffer large fluctuations and allowing consumers to manage their bills.

These applications are particularly important in a world that relies more heavily on energy sources that may be intermittent – such as wind or solar power.

The model shows that at present, the cheapest energy storage mechanism is pumped-storage hydroelectricity, where water is pumped to a higher elevation with spare energy, then released to harvest the energy when needed.

However, as time progresses, pumped-storage hydroelectricity costs do not decrease, whereas lithium-ion battery costs come down, making them the cheapest options for most applications from 2030.