Neste is the first company to deliver sustainable aviation fuel, under its brand name Neste MY Renewable Jet Fuel™, to SFO using existing multi-product pipeline infrastructure. The same pipelines are originally designed to carry fossil fuels and other oil products.

“This is a major milestone in our goal to make San Francisco International Airport a hub for the use of sustainable aviation fuel in our pursuit of carbon neutrality,” says SFO Airport Director Ivar C. Satero. “By focusing on the entire supply chain process, achievements like this one have the power to transform the landscape of our entire industry. I am grateful for our partnership with Neste to make this climate quantum leap a reality.”

“The aviation industry is essential for global business, generating growth and facilitating economic recovery. But if we are to address aviation-related emissions, we need to utilize all the available solutions. We are extremely happy to have partnered with San Francisco International Airport, a forerunner with a concrete emission reduction strategy, to address climate change and support them in achieving those climate targets,” says Thorsten Lange, executive vice president for Renewable Aviation at Neste.

Neste MY Renewable Jet Fuel can be used as a drop-in fuel with existing aircraft engines and airport infrastructure, requiring no extra investment. It is made from sustainably sourced, 100% renewable waste and residue materials, like used cooking oil or animal fats.

In 2018, SFO signed a Memorandum of Understanding (MOU) with Neste and a group of eight airlines and fuel producers to expand the use of SAF at the airport. The agreement was the first of its kind to include fuel suppliers, airlines, and airport agencies in a collaborative effort to accelerate the global transition to SAF. The deal is part of SFO’s five-year strategic plan of becoming a “triple zero” campus, achieving not just carbon neutrality but also net zero energy and zero waste. 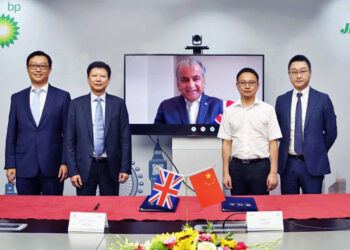