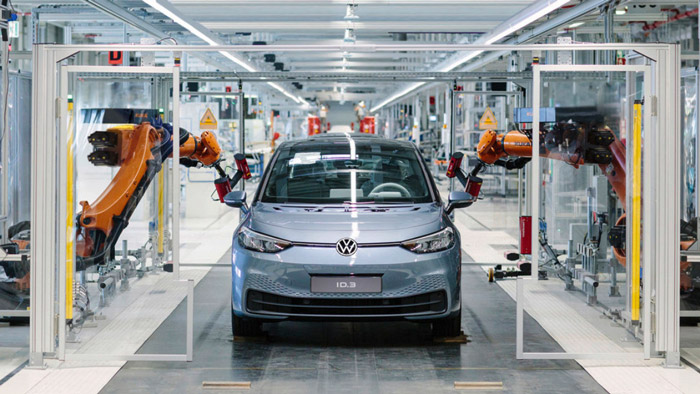 Volkswagen (VW) started the production of its electric vehicle model, the ID.3, at the Zwickau plant in Germany on Monday. In the presence of Federal Chancellor Angela Merkel and CEO Dr. Ing. Herbert Diess, Volkswagen ran the first vehicle of the new e-car generation off the line – a white ID.3. By 2028, Volkswagen wants to sell around 22 million electric vehicles throughout the group.

“The ID.3 will make an important contribution to the breakthrough of e-mobility. It makes clean, individual mobility accessible to millions of people and is a milestone for our company on the way to becoming carbon-neutral by 2050, ” said the CEO of Volkswagen Group Herbert Diess at the ceremony in Zwickau.

The ID.3 is based on the Modular Electric Drive (MEB) kit from Volkswagen. The platform is designed purely for electric and makes the most of the possibilities of e-mobility. Thus, the ID.3 has long ranges, plenty of space in the interior and dynamic handling. In Germany, the basic version will cost less than EUR30,000 (USD33,307).

The market launch of the ID.3 will take place almost simultaneously throughout Europe in the summer of 2020. More than 35,000 international customers have already reserved an ID.3 and made a down payment as an early bird.

In terms of sustainability, the ID.3 sets new standards: It is produced CO 2 neutral and without the so-called “CO 2 passed rucksack” to customers. For example, the energy-intensive battery cell production of the ID.3 uses 100% green electricity. Currently unavoidable emissions in the entire production process of the ID.3 are compensated, inter alia, by the support of the “Katingan Mataya Forest Protection” climate protection project on the Indonesian island of Borneo.

With the gradual transformation of the Zwickau vehicle factory, Volkswagen is for the first time completely switching over a major car factory to e-mobility. The investments for the conversion amount to about EUR1.2 billion (USD1.33 billion). In the final expansion phase from 2021, six MEB models will be built in Zwickau for three group brands. All 8,000 employees are prepared as part of qualification measures for the production of electric cars and the handling of heavy current. All in all, the Zwickau team will complete around 13,000 training days by the end of 2020. This creates long-term jobs for the future at the Zwickau location.

“The ID.3 is a high-tech car from a high-tech factory. With around 1,700 robots, driverless transport systems and fully-automated production processes, Zwickau will be demonstrating how forward-looking volume production of electric cars must look today, “says Thomas Ulbrich, CEO, E-Mobility, of the Volkswagen brand. Ultimately, however, the people who produce the car are decisive for the success. Our team in Saxony has mastered the two-year conversion phase right up to today’s production start-up with a great deal of know-how and dedication. A great team effort! ”

In addition to production at the Zwickau plant, the component plants in Braunschweig, Kassel, Salzgitter, and Wolfsburg are also involved in the ID.3. They manufacture important components such as the electric motor or the battery system. The vehicle factories Emden and Hanover should also begin in 2022 with the production of electric cars. Together with Northvolt, the group also plans to build a gigafactory for battery cells in Salzgitter.

Nouryon and Forge Nano to collaborate on ultra-thin coatings technology